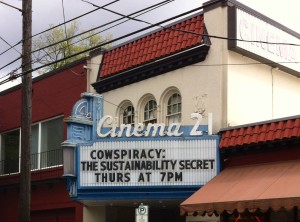 Two disconnected events yesterday and today were linked in my mind to the large, open spaces of the West and the challenges we face in striving for a sustainable future.  The first was spotting this marquee yesterday with “The Sustainability Secret” catching my eye.  The cowspiracy took longer to process.

he link to a sustainability secret being secondary as suggested in the title. After reading about the intrepid filmmaker “uncovering the most destructive industry facing the planet today, and investigates why the world’s leading environmental organizations are too afraid to talk about it” I don’t think the film reflects a whole systems approach to problem solving, but I won’t say much more until I have a chance to see it.  And there was that nasty situation in 1998 summed up in this story headline as “Oprah Winfrey vs. The Beef People.”  Will maintain an open mind.

What came along today in my inbox was a New York Times documentary on the Sage Grouse and Wind Turbines.  These two events together got me thinking of several sustainability champions that address climate change from the perspective of grasslands, carbon, cows and (what wasn’t mentioned much) climate change: 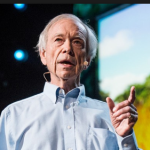 In this video, Grasslands, Carbon, and Climate Change, Jeff Goebel talks about the importance of restoring grasslands to pull carbon out of the atmosphere, doing so rather quickly, and the relationship of grassland restoration to climate change. His interview relates to cows and places like Wyoming where sage grouse live.  Jeff has been influenced by the work of Allan Savory who isPresident and Co-founder of the Savory Institute in Boulder, Colorado and is featured here in this video interview, How to green the world’s deserts and reverse climate change.

“Desertification is a fancy word for land that is turning to desert,” begins Allan Savory in this quietly powerful talk. And terrifyingly, it’s happening to about two-thirds of the world’s grasslands, accelerating climate change and causing traditional grazing societies to descend into social chaos. Savory has devoted his life to stopping it. He now believes — and his work so far shows — that a surprising factor can protect grasslands and even reclaim degraded land that was once desert.

As an urbanite I feel more comfortable learning about the economic and social aspects of sustainability especially when it comes to understanding the conversations and recommendations of experts. Yet my roots are firmly planted in the farmlands of Ireland and Canada, my family having been dairy farmers so I’ve been interviewing farmers and experts like Jeff Goebel and Allan Savory then adding them to the EarthSayers.tv in special collections addressing biodiversity and climate change.  I hope this post proves useful to understanding what may well be a sustainability secret, one I would argue of many.