There’s the New York Times as content maker, the role we are all familiar with, and channel, the role we assume, but do not label, especially with the tv-like word, channel.

In the last week the New York Times demonstrates a shift that’s going on with user generated content from all bad to, well, interesting. Let’s take a look.

Front page New York Times – photography with cell phone. Video example is of pepper spraying police officer which was all over the news this last week. 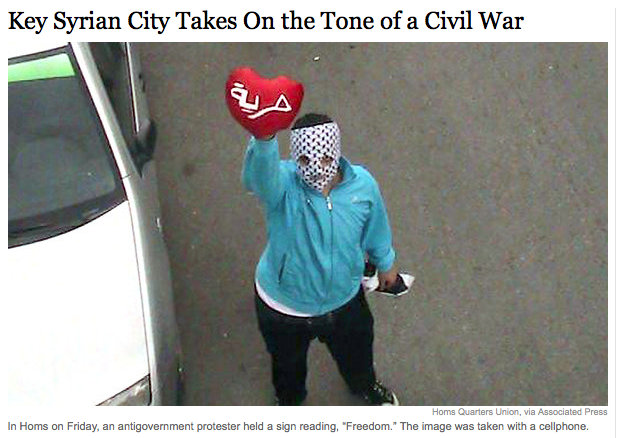 And then there was the “homemade” video that made it on to their video channel (page) for a series about love and relationships which while not political, is social and cultural and a good start to incorporating citizen-powered online video into a mainstream channel. 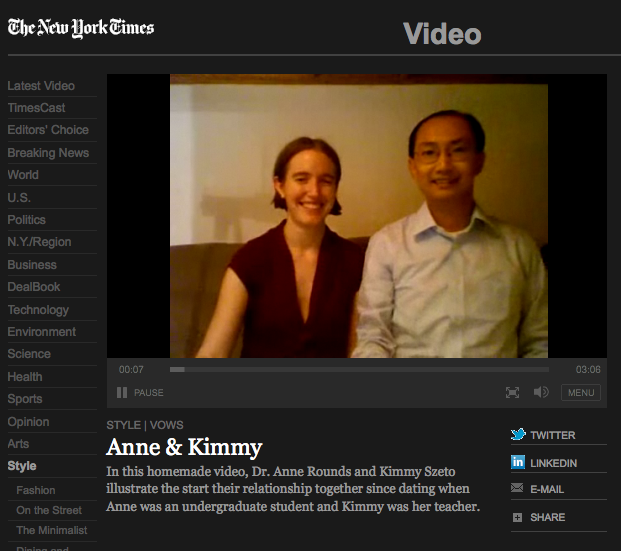 And the video by the Times  (not clear if producer is on staff or not) that’s news about a performance art piece featuring naked performers has the look and feel of user generated content and addresses, er, transparency. 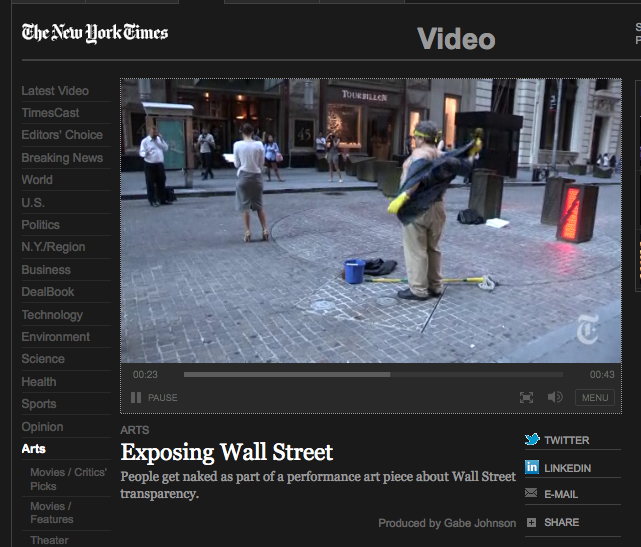 Hope the schools of journalism and communication are paying attention to this because writing it is not, fact checking it need not be, and when it comes to citizen-powered, video content it’s carpe diem or, well, get left behind.

We see the opportunity to pair a sustainability channel with sustainability-related social networks and subscriber bases for kick starting citizen-powered online video as part of the sustainability movement.   Cause marketing will never be the same. And journalism?

One of the many Web advantages are alerts.   I subscribe to sustainability alerts from the New York Times and, recently, the Financial Times. I didn’t anticipate any difference, really,  in either the quantity or quality of the news alerts, but I was surprised by both the quality and the quantity.

The alerts from the New York Times come in sporadically, here are four in March:

Now compare these to the alerts from the Financial Times received today, Sunday, April 3, 2011

And three more topics to drive home the point:

What became painfully obvious to me is that the lightweight nature of news stories, not only in the New York Times, but 3BL Media and their CSR Minute (they mix sustainability and CSR coverage) as well as Just Means (actually Just Means positions itself as one stop news for CSR, but mix in sustainability) are practicing business oriented  reporting on what mostly boils down to what I call RADs or reports, awards, and do-good stories praising corporations for their actions.

Even Sustainable Life Media (SLM) (sustainable business focus and “bridge to better brands”) spends an inordinate amount of time and space covering the do-good actions of large, multi-national corporations some of which have as their core business toxic chemicals and reputations for environmental and social justice abuses.  There are exceptions such as a recent story by Bart King in SLM that PUMA could be the first brand to measure impact on eco-system services, a major accounting and financial management issue.  This is a critical sustainability issue as discussed on EarthSayers.tv by  John Fullerton of the Capital Institute and Larry O’Connor of LaTrobe University in Australia. Interestingly enough PUMA’s initiative is part of a larger one by the French parent company, PPR group. The author goes on to report, “The Group said the overarching program, dubbed PPR Home, will go beyond the traditional Corporate Social Responsibility model and set a new standard in sustainability and business practice in the Luxury, Sport & Lifestyle and Retail sectors.”

Fact is, though, if you are in the business of reporting on sustainability here in the U.S., there’s not much out there.  No point in blaming the messenger unless they aren’t digging deep enough and finding those companies who are making inroads like B Corporations and non-profits such as the Textile Exchange. The messengers are reporting on what corporations are giving them as news and progress. It’s all about RADs – reports, awards, and the do-good stuff.  At some point, however, a U.S. focus on large companies combined with the assumption that CSR can be reported as sustainability and vice versa makes  “news” more like PR spin and reporting more like marketing rather than journalism, blogs or no blogs.

Lloyds of London, the global insurance giant, issued something of a warning to businesses on its Web site just last Friday. “Pressure is building on businesses to address the environmental impact of their operations,” the firm wrote. “Moves by intergovernmental bodies and investors suggest that they could soon be made more financially accountable for the pollution they cause… some experts are even predicting that many of the world’s biggest companies could see their profits cut by one third as a result of more stringent regulation, the abolition of subsidies and increased taxes.”

Excerpt from the New York Times article: Can Business Do the Job All by Itself?

As a member of Generation Y who has spent my adult life downloading individual songs and listening to them on shuffle, I appreciated Matt Bai’s take on President Obama’s detour from the linear governing style of past presidents as particularly relevant to younger Americans.

I wish Bai had gone a step further in this trajectory, instead of continuing to silo the problems of health care, climate change and economic crisis. While the author views these issues as competing for the attention of the president and the public, the story that is waiting to be told is the one that unites these issues as symptoms of our decades’ long failure to create moderate, forward-thinking systems that are built on concepts of sustainability and prevention. None can be solved on its own; led by the “shuffle” generation, we must take the leap — a paradigm shift toward sustainable, systemic solutions to all of these problems together.