Will we continue to talk about the changes in climate, climate variability, warming temperatures, extreme weather, exceptional drought, or Hurricane Sandy, but not use the term climate change so we as sustainability advocates don’t step on anyone’s toes?  Why are we targeting the 12,000 folks a month using Google to search on, say, climate variability, only a fourth of them from the United States and not the estimated 2,240,000 citizens searching monthly using the term, climate change, 30% of them in the United States?

Should we even care about the 3,600 searchers using the term climate change hoax, considerably less than the 18,000 wanting information on the global warming hoax, a majority of these searchers, 66%, being from the United States?  Are we not at the back of the pack addressing the stragglers when we fail to title, describe, and tag properly our papers, blog posts, reports, and videos addressing global warming and climate change?

The mainstream media appears to be in the back somewhere.  When on June 25th the President of the United States makes a major address on climate change it doesn’t register on the dial with the press, but it does cause a spike in search traffic, so the Web part of the awareness cycle is working even if TV isn’t.  We need both. 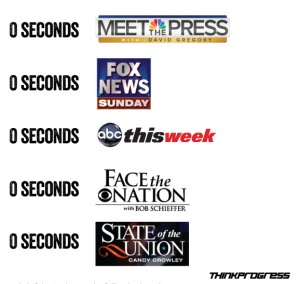 Just how much of a snoozer was the President’s speech in terms of “news” was discussed by Bill Moyers and Marty Kaplan, the Norman Lear Professor of Entertainment, Media and Society. Here is a four-minute video clip of their conversation. In the video see how Fox News used a smidgen of the President’s speech as a segue way to the author of Red Hot Lies – a lesson in distraction and manipulation.  Bill Moyers references an infographic by Think Progress that sums it all up as in zero seconds for major programs.

In the case of building awareness, no news is not good news.

Are people afraid to talk directly about climate change? Some may have a good reason to be afraid. There are reports of climatologists loosing jobs because they expressed a belief in climate change, or didn’t, depending on the political climate in their State or their boss.   For a flavor of the pressures professionals can find themselves under listen to This American Life, podcast 495, Hot In My Backyard, May 13, 2013 featuring the story of Colorado’s State Climatologist, Nolan Doesken.

Three years ago I wrote a blog post citing Elizabeth Kolbert reporting in the The New Yorker “a quarter of the TV weather-casters AGREE with the statement ‘global warming is a scam,’ and nearly two-thirds believe that, if warming is occurring, it is caused mostly by natural change.” While I can’t find a study to confirm a shift in the thinking of these folks over the last three years I can appreciate this headline on the Weather Channel last week (Jul 24, 2013) as a sign of a shift, an increasing awareness:

“Poison Ivy is Growing Out of Control, Thanks to Climate Change”

Fortunately, business leaders such as General Motor’s Mike Robinson, Vice President of Sustainability and Global Regulatory Affairs are openly discussing the importance of preventing climate change. In this video posted by 3BL Media Mike talks about the steps GM is taking to stop climate change and why it is important to address it. The North American International Auto Show (NAIAS) hosted a panel, Business in the Age of Climate Change with leaders from the Ford Motor Company and the WWF (video here).  Elected officials including President Obama are stepping up to the plate such as Maryland Governor Martin O’Malley’s presentation at a state-wide Climate Change Summit, and Mayor Bloomberg”s speech, “A Stronger, More Resilient New York.”

GM Works with Ceres, an advocacy .org for sustainability leadership, “to reduce carbon emissions, improve energy efficiency and increase investment in a clean energy economy.” The Ceres Climate Declaration (full list here) signed by GM and a host of companies makes it clear where they stand on climate science.  Sign the declaration as an individual and/or company here and join with Levi Strauss & Co., The Weather Company, Method, L’Oreal, Nike, AMD, Intel and many more.

What’s in a name? When it comes to search and using the Web to educate and inspire, terminology is extremely important. Denial of climate change is what the stragglers are chatting about. Let’s move on. As sustainability advocates target those active in the learning cycle on climate change (searching on Google and YouTube qualifies an individual as active) to increase awareness and emphasize the connections  to the pressing issues of water, energy, and even poison ivy.  Let’s as sustainability advocates emphasize in our conversations and communications the leaders among us who openly discuss climate change and are working to do something about it. Distance yourself and company from organizations associated with skepticism, the Heartland Institute being identified as the most prominent one by the Economist in May 2012, a quote featured  here on the Heartland Website.