If we are going to pursue sustainability as an operating principle of our planet, then it can’t remain business as usual when it comes to the buying and selling of oil as we are denying and acting against the basic principle that a country belongs to its people.  An especially treacherous situation made worse when coupled with the bad, old rule, ‘Might Makes Right.’ 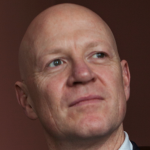 I found Professor Wenar’s speech given in Seattle, Washington last week (January 27th) educational and realistic, yet hopeful in our ability to retire dysfunctional rules and embrace our principles when it comes to the buying and selling of oil and other natural resources.  Yes, the going will be tough, but this is one of the major ‘somethings’ that has got to give. This post is a summary of his hour long teaching and includes two video excerpts (1) The Hope for Change: Ending ‘Might Makes Right’ and (2) the Second Ground for Hope.

Leif Wenar author of the book, Blood Oil: Tyrants, Violence, and the Rules That Run the World holds the Chair of Philosophy & Law at King’s College London. After ear 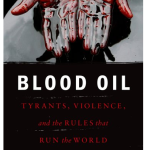 ning his Bachelor’s degree from Stanford, he went to Harvard to study with John Rawls, and wrote his doctoral thesis on property rights with Robert Nozick and T.M. Scanlon. He has worked in the UK since 1997.

“Because we have this bad old rule oil is the largest source of unaccountable power in our world. Because we use this rule of might makes right, it’s like there are these giant reservoirs of cash underground and whoever can dig down and keep control over the holes in the ground will generate a tremendous amount of cash with which they can buy arms and security and torture chambers. The money is almost entirely unaccountable. Basically it goes to whoever has the most guns. Unlike foreign aid, oil money comes with no strings attached and unlike foreign loans it never has to be paid back. And the people of the country have no chance to control the resources of their country. They just have to watch while the natural wealth of their country is sold off beyond their control.

So all of this means that we are in a bad place. For over forty years our worst crises have come from oil states from the Soviet Union to the Middle East and Africa. Our money has been funding conflict and oppression and intolerant ideologies. And I’m sad to say our problems may really get worse. 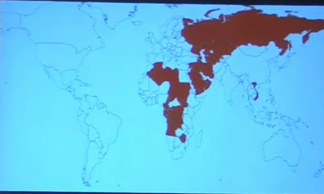 What we’ve seen for the past three decades is bad but there’s this arc of oil running from Siberia through the Middle East and Africa. In the red you see failed states and authoritarian states and as you can tell from reading the news for the past few years that arc of oil is getting more and more unstable. Green revolution, Arab Spring, now the conflicts in Iraq, Syria and Libya and Yemen and the cold war between Saudi and Iran heating up that Arc of Oil is already getting more unstable and experts in Washington say that’s just the area that is now going to become hotter, more crowded, hungrier and thirstier which means it will probably be even less stable than it has been so if we thought that the last forty years were bloody and scary the next 15 years may be really terrifying.

Is there any hope for change? So after all that you are going to be surprised to hear, that I’m extremely optimistic that we can make this change.The hope for change comes from two big picture facts about our world its history and where we are now. The first great hope that we can overcome ‘might makes right’ for resources is that throughout history humanity has overcome ‘might makes right’ in other areas many times before. (video clip) And in fact these are some of the greatest moral milestones in human history, the kinds of things you would teach to a child, the high points of our achievements.”  The second great hope is included on this video clip of Professor Wenar’s presentation.

Being on the right side of history.

Listen to Leif Wenar in this video of his hour long presentation, a teaching, as he makes the case for our ability to overcome the rule of “might makes right” and offers a plan for how we can still end up on the right side of history with regards to the issue of buying and selling of natural resources. There is an opportunity for America to take the lead and stop buying authoritarian oil, convince others to do the same, all while reaffirming the American principle, articulated by Lincoln and adopted pretty much worldwide, that a country belongs to its people and that includes the oil and natural resources.

If someone is selling off the natural resources of a country without approval of the people, then what they are selling is stolen and we are not going to buy from them. Can we do that? Yes, the window of opportunity is now.

Read the book, listen to his January 27th speech published by the Talking StickTV channel on Youtube, January 30, 2016 and included in the special collection, Transforming Our Economy, on EarthSayers.tv, Voices of Sustainability.

help, be better able as a proponent of sustainability to recount the Big Picture of oil, discuss the upgrade called for, and continue to champion the sustainability path as a way to move to the right side of history when it comes to buying and selling oil and other natural resources.

There are over 2,000 curated voices of sustainability accessible through EarthSayers.tv, a search engine advancing sustainability leaders who are citizens from all walks of life addressing the needs of our children and the future seven generations.