milestone, heavy as they can be.  I remember my 4oth and 50th for example but not much in between and my all time favorite remains my 16th.  So for this birthday which is an even numbered one and let’s leave it at that, I want to call out the sustainability advocates I have added recently to our collection, Artist & Musicians on EarthSayers.tv, voices of sustainability.  These men and women join business and civic leaders, teachers, consultants, experts, and citizens from all professions as sustainability advocates.

Find some time in  your busy schedule to see and hear what they have to say and think about tapping into our great wealth of creative performers and artists to increase sustainability awareness.  To warm up, Save Planet Earth by Tokyo Rose Band. If you are at work, put in your ear buds.

Interview of Canadian landscape photographer Edward Burtynsky. He talks about the focus of his latest exhibition,  Oil,  composed of 55 color landscapes made over the last decade. Here is a where to view his art exhibited by the Corcoran Gallery of Art, Washington, D.C. and here is a trailer of the documentary, Manufactured Landscapes.

The True Cost of Oil: Tar Sands by Garth Lenz in his speech before the TEDxVictoria audience.  For almost twenty years, Garth’s photography of threatened wilderness regions, devastation, and the impacts on indigenous peoples, has appeared in the world’s leading publications. Garth is a Fellow of the International League Of Conservation Photographers. 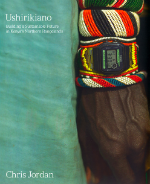 Picturing Excess by the artist, Chris Jordan‘s work addresses the unconscious behaviors that add up to catastrophic consequences which no one intended. He explores the phenomenon of American consumerism. The photo used in this blog is of his book, Ushirikiano: Building a Sustainable Future in Kenya’s Northern Rangelands
(teNeues Publishing Group, 2011).

The band Vocal Trash’s primary goal is to teach children to use their imaginations in a meaningful and perennial regard. Recycling awareness is the secondary goal obtained through creative and inspirational performance utilizing distinguishable items that might normally end up in a Landfill, (metals, plastics, etc).
Along the same lines, percusionista, Fellé Vega is devoted to finding “the sound of life” and experiments with recyclable materials and everyday objects that have percussive possibilities, such as pails, lids and pots, which he then turns into musical instruments. His performance filmed as part of  TEDxSantoDomingo.
Hymn to the Rainforest by Sarah Brightman invited by The Prince’s Rainforests Project to sing at an event they hosted to engage the financial community in the task of finding a solution to the problem of making rainforests worth more alive than dead. This is the film that accompanied her singing. The music is Nella Fantasia – used in the soundtrack of the movie – The Mission, and often called a Hymn To the Rainforest. For more information go here.

Our Generation sung by John Legend and The Roots performing Ernie Hines’ 1970 classic at Terminal 5 in New York City, September 23, 2010.

What Can I do for social and ecological justice? Spoken word poet and activist Drew Dellinger says that one of the deepest questions a person can face is, What can I do?, and describes the quest to answer it as a spiritual challenge.

Our True Nature, a riff on our true nature by spoken word artist, Steve Connell.