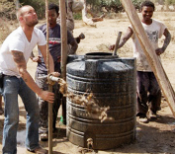 1 thought on “Wine Into Water works for us all”