The chief curator (me) at EarthSayers.tv, Voices of Sustainability, has created a new channel addressing Climate Justice. The impetus for doing so arose out of a study by the Yale

Program for Climate Change Communication. They conduct scientific research on public climate change knowledge, attitudes, policy preferences, and behavior, and the underlying psychological, cultural, and political factors that influence them. Of particular interest was their audience research, Global Warming’s Six Americas. A must read.

For climate change communicators I assume that this study formed the foundation for your present programs and campaigns. However, for those of us sustainability advocates with an environmental, social, and economic bent the Yale Program research may have been missed given the information overload that climatographer Mark Trexler addressed in his whitepaper, The Problem of Infinite Information in Corporate Climate Change Decision-Making.

Initially, these are the voices we are advancing on the topic of Climate Justice with more to come.   Start with Linda Haydock of the Inter-community Peace & Justice Center’s What is Climate Justice?  Continue on with Mary Robinson, former President of Ireland and former

United Nations High Commissioner for Human Rights on  “Climate Change as a Human Rights Issue” and Julia Olson of Our Children’s Trust on “Securing the Legal Right to a Stable Climate.”  If you parent or work with the more youthful among us, especially millennials, you might want to listen to the conversation between Dr. James Hansen and his grand daughter, Sophie Kivlehan on ” Young Peoples Burden.”

There are other voices to include Pope Francis, M.E. Tucker, David Korten, Anthony Leiserowitz, Tim Brennan and HH Dalai Lama.

“Most Americans say global warming is personally important to them, but don’t talk or hear about it much.”  Yale Program Climate Note of September 29, 2016

I can’t do much about the talking part, but I can improve on the number of people, like you, hearing about it.  It’s up to you to re-frame the conversation around climate change to climate justice and talk with your family, friends, and work colleagues.

“More than half of those who are interested in global warming or think the issue is important “rarely” or “never” talk about it with family and friends (57% and 54% respectively).” 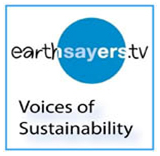 The ongoing story of the Coalition for Immokalee Workers is a model of place-based community action (grassroots) working through coalition, collaboration, and agreement rather than separation, disagreement and opposition. It’s about CSR, business human rights, and leadership.

Commissioner of Human Rights, moved beyond “declarations” and used her leadership position and power to bring support to the co-founders Lucas Benitez and Gerardo Reyes-Chavez of the Coalition of Immokalee Workers.

We have added three videos today to EarthSayers.tv, Farming and Food Production special collection, to share our respect for and advance the work of Lucas Benitez, Co-Director,

Coalition of Immokalee Workers (CIW) and that of the workers, friends, members, and colleagues of the Coalition.

The first video is a speech by Mr. Benitez back in 2002 at the Mary Robinson Speaker Series in which he honors Mary Robinson for joining their cause and talks about the Coalition and the Code of Conduct they are successfully enlisting Corporations and growers to sign and adopt.

The second video is a news report from Democracy Now for today, May 20th on the hundreds of farm workers and their supporters who are in New York City ahead of Wendy’s shareholder meeting to ask for improved working conditions for those who pick its tomatoes in the Fair

Food campaign organized by the Coalition of Immokalee Workers.  CIW farmworker and a co-founder with Lucas of the CIW, Gerardo Reyes-Chavez talks about this social responsibility campaign.  So far McDonald’s, Subway, Burger King and Taco Bell have all joined the White House-recognized Social Responsibility Program, agreeing to pay an extra penny per pound of tomatoes to raise wages and only buy from fields where workers’ rights are respected.

The third is a video record of the fifteen-day, 200-mile March for Rights, Respect, and Fair Food which came to a “loud, colorful, and jubilant end” on Sunday, March 17th outside Publix corporate headquarters in Lakeland, Florida.